Drs. Shaf Keshavjee and Marcelo Cypel were recognized yesterday as the joint-winners of UHN's 2018 Inventor of the Year by the UHN Technology Development & Commercialization Office (TDC).

Each year, UHN's TDC awards and celebrates a UHN inventor or inventors who illustrate noteworthy excellence through inventiveness in research, critical contributions and commercial successes impacting patients and their quality of life.

Drs. Keshavjee and Cypel are internationally recognized lung transplant surgeons at UHN – one of the top ranked organ transplant centres in North America and the number one Lung Transplant Clinical and Research Centre worldwide.

They are being honoured for development of the Toronto Ex Vivo Lung Perfusion (EVLP) System, a landmark advance in lung transplantation.  It has contributed greatly to increasing the availability of donor lungs.

There is significant mortality on current lung transplant waiting lists, with rates up to 16 per cent and more per year for some diagnoses. Yet, lung transplantation is the only life-saving therapy for patients with end-stage lung disease due to conditions such as Pulmonary Fibrosis, Cystic Fibrosis, Pulmonary Hypertension and Chronic Obstructive Pulmonary Disease (COPD).

Oxygenated and provided nutrition for an extended period of time

The single key hurdle remains a shortage of clinically acceptable donor organs for transplantation – up to 80 per cent of donor lungs are discarded due to suspected injury.

To overcome this challenge, Drs. Keshavjee and Cypel created the Toronto EVLP System.

Using the Toronto EVLP System, donated lungs are placed in a sterile chamber, oxygenated and provided nutrition for an extended period of time. The protective system enables the transplant team to assess the lung and, if required, treat it with medication or sophisticated therapies such as gene therapy or cell therapy, thereby rehabilitating injured lungs and further increasing the donor lung pool.

This means that lungs that previously may have been discarded can now be repaired sufficiently for a successful transplant and a reduced chance of rejection. 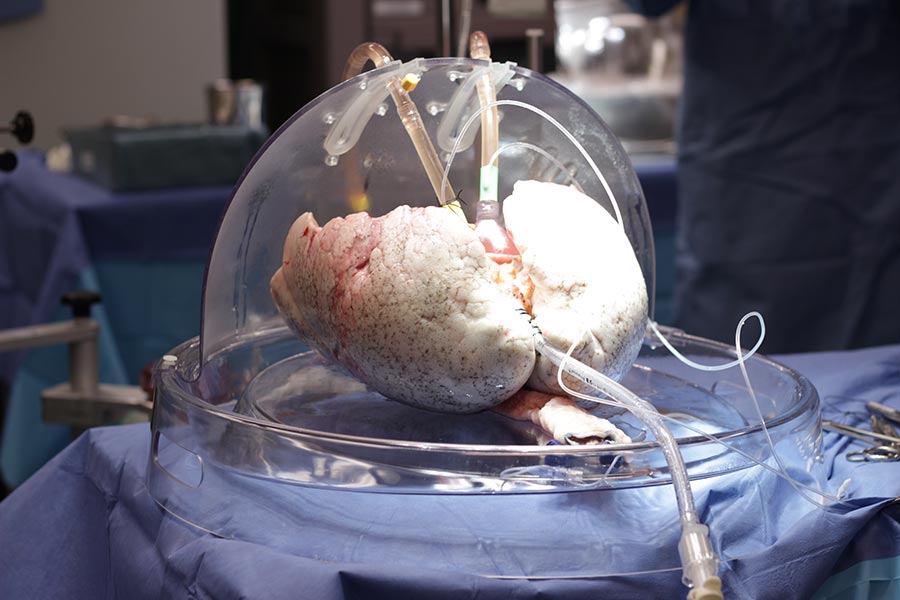 This process allows for the safe assessment and reconditioning of what are originally considered "marginal" donor lungs – lungs that don't quite meet transplant criteria and are considered not acceptable or borderline during the retrieval process. That enables clinicians to verify that these lungs meet the high standards for transplantation.

An additional benefit of the Toronto EVLP System is that it allows doctors to know how the lungs will function before they are transplanted, thereby reducing the risk of patient death post-transplant.

Use of the Toronto EVLP System at UHN has accounted for an increase in donor lung utilization from a range of 15 to 20 per cent, to up to 50 per cent today. That has translated to a doubling in lung transplants performed each year at UHN, including 194 in 2018, with patient outcomes equivalent to those receiving standard donor lungs.

Could substantially address the global shortage of donor lungs

More than 550 clinical cases in Toronto, and many more internationally, have been performed using EVLP, resulting in thousands of lives saved for patients with end stage lung diseases.

In addition to leading UHN's Latner Thoracic Research Laboratories, Dr. Keshavjee is the Surgeon-in-Chief at UHN, Director of the Toronto Lung Transplant Program, and a Senior Scientist at UHN and Professor at the University of Toronto.

Dr. Marcelo Cypel is a staff Thoracic Surgeon at UHN and an Assistant Professor of Surgery at the University of Toronto. He is the Director of the Extracorporeal Life Support Program at UHN, Surgical Director of the UHN Transplant Program, and holds the prestigious Canada Research Chair in Lung Transplantation from the Government of Canada.

The development and successful clinical translation of Toronto EVLP System has inspired a paradigm shift that will lead future generations to view this technology as standard practice in all transplant centres, and is highly emblematic of the patient-impacting work TDC's Inventor of the Year Award strives to recognize.

Drs. Keshavjee and Cypel have served as passionate advocates for ex vivo perfusion and organ transplantation. Together, the team are proud representatives of the UHN Inventor of the Year Award and will continue to strive toward worldwide dissemination of ex vivo organ perfusion and provide the best innovative patient care to all in need.